Fellow anons: we are pleased to bring you the dismantling of a major US-based 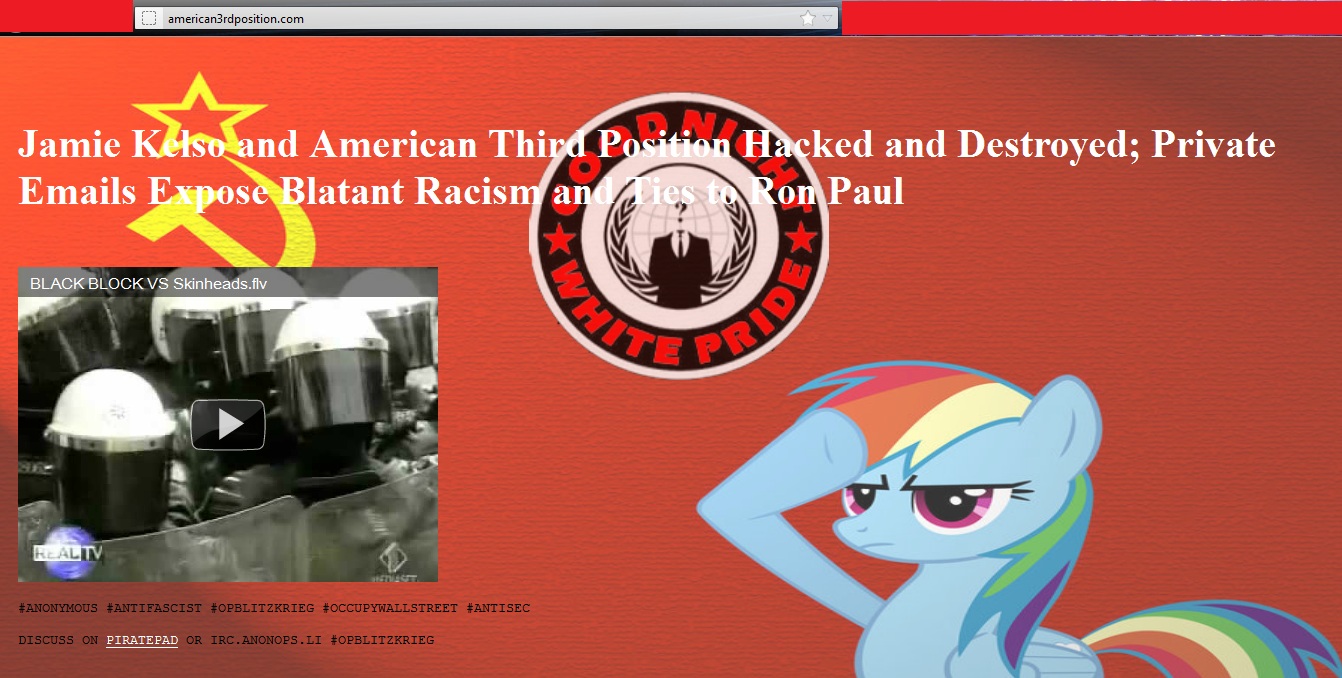 white supremacist network known as the “American Third Position”(A3P). These racist losers have chapters across the US, operate several white power websites, forums and online stores, and are even running a candidate in the 2012 elections. Although they try hard to maintain a professional public image to camouflage their vile racism, we’re now airing all their dirty laundry all over the internet. Contained in this major dump are several thousand private forum
messages, personal emails, internal organization notes, names, phone numbers,
home addresses and other information on all of their members and supporters. It’s time for these cowardly suit and tie white supremacists to sleep with one eye open. Scared much?

In addition to finding the usual racist rants and interactions with other white power groups, we also found a disturbingly high amount of members who are also involved in campaigning for Ron Paul. According to these messages, Ron Paul has regularly met with many A3P members, even engaging in conference calls with their board of directors as recent as XXXXXX. Ron Paul’s racist politics and affiliations are already well known, being viciously anti-immigrant, anti-abortion and against gay marriage — not to mention having authored the racist “Ron Paul Papers” and receiving financial support from other white power groups (pictured with Don Black from stormfront.org). Hard to believe Ron Paul draws some support from the left and the occupation movements, especially now that it is confirmed Ron Paul hangs out with straight up racist hate groups.

We put extra effort in ruining the life of A3P webmaster Jamie Kelso. On top of being on the board of directors of A3P, former $cientologist, and high ranking Ron Paul organizer, he also is the account owner of german nazi forums and store nsl-forum.org, rhs-versand.com. We went ahead and wiped those websites off the internet as well, dumping private messages and order information. Aside from us releasing his information such as his social security number, address, resume and private discussions, we also heard some folks went on a joyride with Kelso’s credit card and made some lulzy purchases, including sex toy purchases and making donations to the Anti Defamation League and many others. Oops.

We call upon not only other antifascists but all those opposed to white supremacy to utilize this information and make hell for these white nationalist scumbags. It is essential if we wish to live in a world free from oppression to expose and confront racists at their jobs, their schools, at their homes and in the streets.

Addresses, phone numbers  and other  personal info on hundreds
of A3P members,supporters and merchandise purchasers