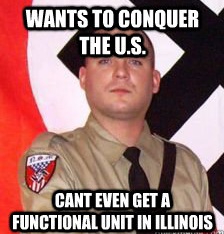 After a few antifascist attacks against Chris Rothe, including a flier drop at his place of business and his neighborhood,  he has resigned from the National Socialist Movement, giving up his chosen role as state leader. A major factor that led him to make this decision was not only the attacks but the lack of support from the NSM after the attacks occurred. Though this does not necessarily mean Chris isn’t a nazi, he is no longer affiliated with that  particular organization. Since they have lost supporter William Kennedy, as well as members Suzan Lenner, Billy Woods, and the hated and proud skins, for the same reason, the NSM is left without a functional chapter in Illinois.

To Whom it may concern, I Chris Rothe wish to resign and cease all activity/contact with the NSM i wish to not be affiliated with not even support the NSM effective immediately.

I want to detour anyone who has interest in the nsm, i should start by letting you know my car was vandalized my windows got busted out and my tires slashed. I was upset when this happened and when i told the members of the nsm about this noone offered any help to me, not a fucking dime. Noone offered to take my back, noone offered to help me pay my deductable. Its funny they want you to support them but who supports you when something happens. I can assure you that if your interested in the nsm that nothing good will come of it, what would happen if i would have been hospitalized at a rally or something i would have been all alone paying bills. At the end of the day its all a bunch of lies that lead to violence and quite simply your on your own noone gives a fuck.

Statement from the Hated and Proud skins:

We regret to announce that we are no longer working with the NSM. We hold no hard feelings towards the NSM overall, but believe that their recruiting method is extremely flawed and unsafe. We would rather work amongst ourselves and recruit new individuals based on trust rather than simply to inflate our ranks.

There were rumors going around that the NSM hoped to host the conference in Chicago next year, but with their Illinois unit in shambles, we seriously doubt that. It appears that Missouri or Texas is the likely location for the NSM 2014 conference.