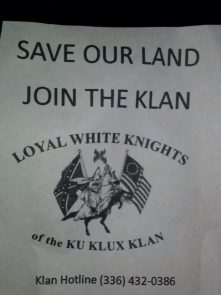 The Loyal White Knights are based out of Pelham, NC and are lead by “Imperial Wizard” Chris Barker and “Imperial Kilgrapp” Amanda Barker (might possibly be living at 1214 Carolina Ave Eden, NC).  The group is a source of much controversy amongst Klan types who not only dislike their ties with the neo nazi group knows as the National Socialist Movement (NSM), but also believe Chris Barker is an FBI informant. The Klan, although white supremacist, are not traditionally supposed to align themselves with straight up “nazis”(of course their differences are unimportant to us). As far as the informant rumors go, we are unsure where those began, and can not comment either way. Perhaps it’s typical conspiracy theory, perhaps it’s not.

With no previous activity that we know of from them in New Lenox, we can only assume it’s an individual or a small group of people trying to form a new “realm”.

Taken from the New Lenox Patch:

A New Lenox landlady said her tenants found racist Ku Klux Klan leaflet at the foot of their driveway.

“Save Our Land Join The Klan,” proclaims the leaflet dropped in a driveway near the intersection of Cedar Road and Joliet Highway in unincorporated New Lenox.

Landlady Cassandra Higgins said her tenants alerted her to the racist literature and she called the county police.

Higgins said the cops told her it was up to the tenants to decide whether to file a police report.

“I don’t think they’re too interested in filing,” Higgins said.

Neighbors at two other residences near the intersection found the same leaflet in their driveways, said Higgins. The leaflets were delivered in plastic bags weighted down by small stones, she said.

Will County Sheriff’s Department spokeswoman Kathy Hoffmeyer said deputies have taken no reports with regard to Ku Klux Klan literature.

Besides admonishing readers to save their land by joining the Klan, the leaflet, which was apparently produced by the “Loyal White Knights of the Ku Klux Klan,” included a telephone number with a North Carolina area code.

The number is answered by a recording that says, “Greetings white brothers and sisters, you have just reached the Loyal White Knights of the Ku Klux Klan, one of the most active Klans in the U.S. fighting for equal rights for whites.”

The recording encourages callers who want to join the Ku Klux Klan to leave their contact information and closes with, “Always remember, if it ain’t white, it ain’t right. White power.” New Lenox area and plans to conduct a clandestine neighborhood watch in town.

“All I can tell you is we’re recruiting and we’re having great success,” said William J. Spears, the “Imperial Kaltrop” of the Loyal White Knights of the Ku Klux Klan in the “Realm of South Carolina.”

Spears responded to a query about Klan literature left in the driveway of a home near the intersection of Cedar Road and Joliet Highway. He said his group distributed the leaflet during one of its “night rides when we go out dropping off fliers.”

In addition to nocturnal leaflet distribution, Spears said the Klan patrols the streets looking for crime.

“If we see any illegal activity we report it to the police,” he said, discouraging the notion that the Klan would try to take the law into its own hands or act as vigilantes.

“They have nothing to be afraid of,” Spears said of the people of New Lenox. “I think they should feel very safe the Klan is conducting neighborhood watches.”

New Lenox Mayor Tim Baldermann was less than enthused by the prospect of a KKK neighborhood watch coming to town.

“I was unaware that they were Guardian Angels,” said Baldermann, who has never encountered the Klan before, either as mayor or during his time as the Chicago Ridge police chief.

Spears declined to say which town in the Realm of South Carolina he operates out of and also would not disclose the location of the Klan’s New Lenox headquarters.

“It’s a secret,” he said. “We’re the invisible empire. That’s our nickname.”

Spears was equally tightlipped about how many members are in the Klan’s New Lenox chapter. Baldermann questioned why the Spears was keeping so quiet.