On August 5, 2012, Wade Michael Page (who was living at Wade Page 726 Minnesota Ave, Apt 5 South Milwaukee, WI 53172-2142) opened fire on members of the congregation of the Sikh Temple in Oak Creek, Milwaukee.  Six were left dead, three were wounded, and a police officer responding to the scene was was shot multiple times before another officer shot and killed Page.

The events of this day are a tragedy for the congregation, for the community, and for the families and loved ones of those shot.  However, we have seen this tragedy happen before.  White supremacists leave a trail of terror wherever they organize, targeting people of color, immigrants, LGBT people, and leftists.

In April, Minnesota white supremacists Joseph Thomas and Samuel Johnson (ex-National Socialist Movement) were arrested prior to planned attacks intended to coincide with May 1st, an international holiday for socialist and labor movements.  Thomas and Johnson were organizing an “Aryan Liberation Movement” that would use violent means to provoke a race war.  Both were spotted observing and documenting participants in pro-immigration rallies, and according to the affidavit planned to attack the Mexican embassy.

Earlier this year in May, former National Socialist Movement member and border vigilante J.T. Ready went on a shooting rampage that resulted in the death of his girlfriend, her daughter, granddaughter, and her daughter’s boyfriend.  Ready committed suicide after the massacre.  Ready had also been under investigation by the FBI for the murder of immigrants whose bodies had been found along the border of Arizona and Mexico.

Milwaukee has been on south side’s shit list for over a year now. During the NSM’s opportunistic attempts to rally in West Allis, WI after a so called “anti-white flash mob attack”, it became abundantly clear that Milwaukee had its share of white supremacists. It also became clear that its opposition was dominated almost entirely by liberals who were literally hushing those they believed to be chanting too loud,  proving not only their authoritarian and dictatorial character, but also their unwillingness to challenge the fascists in any serious way.

People have tried to vilify militant anti-fascist activity for years, whether it’s for being too “violent” or simply not important, but events like this only show that direct confrontation against the fascists and white supremacists is absolutely necessary. We hope that, because of this tragedy and others alike, militant anti-fascism will start to emerge in Milwaukee and other places where antifas appear to be less prevalent. No sympathy for the fascists!

Taken from One Peoples Project: 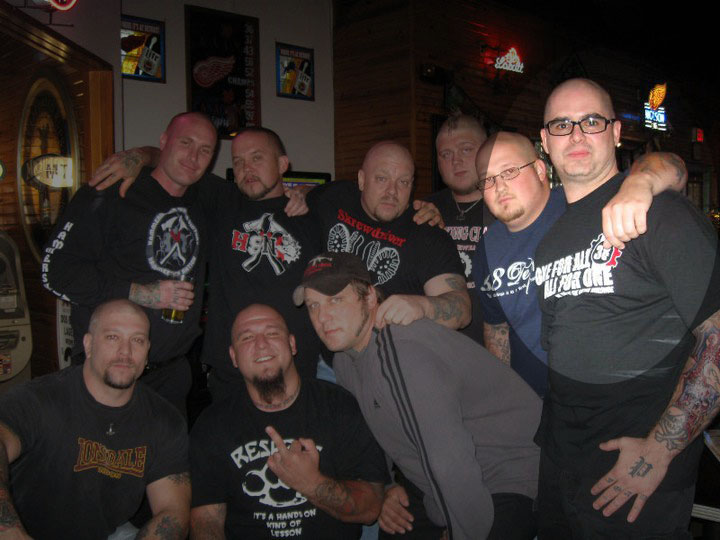 OAK CREEK, WI–The shooter in the shooting at a Sikh Temple in suburban Milwaukee that killed six people before police gunned him down has been identified as Wade Michael Page, a member of the Hammerskin Nation HSN, the oldest and most violent neo-Nazi bonehead organization in the United States.

According to the Anti-Defamation League website, Hammerskin Nation was formed in Dallas, Texas in the late 80s, adopting the crossed hammers – the symbol used by the fascists in Pink Floyd’s the Wall as their organization’s logo. At its peak, HSN was able to boast dozens of chapters across the United States and worldwide. They are best known for holding concerts around the country known as Hammerfest, but also for the murders and other violent acts that have been committed by HSN members over the past 20 years. As of late the organization has lost the strength it once had, and other organizations like Volksfront and the Vinlander Social Club – an organization founded from the remnants of the Outlaw Hammerskins, which were former Hammerskin members that were ousted – came into being.

At the time of his death, Page, 40, was a member of the CHS band Definite Hate, a longtime HSN band that has several Hammerskin-themed albums, including “Hammerfest 2009”, and “Murder City Hammerfest 2010” and “Tribute to Hammer Joe”, which was dedicated to the late Nordic Thunder singer Joe Rowan, who was killed in 1993 in a Green Bay, Wisconsin convenience store after a white power concert. Definite Hate played Hammerfest 2011 in Tampa, Florida.

In 2005, Page, along with two members of Definite Hate started another band. End Apathy. According to their MySpace profile, End Apathy was based in Nashville, TN and North Carolina, and have several recordings released via the white power distribution company Label 56. In an interview on the Label 56 website, Page noted that after he left his native Colorado in 2000, he had been in other bands prior to End Apathy. “I had the opportunity to play bass with Youngland for 2 years back in 2001 – 2003 and during that time I filled in for various bands on guitar and bass including Celtic Warrior, Radikahl, Max Resist, Intimidation One, Aggressive Force, Blue Eyed Devils,” he said. All these bands have been associated with HSN.

Headed by Clemie Richard Haught, Label 56 is the music outlet for a violent neo-Nazi gang called Maryland State “Skinheads” (MDS). MDS head Jason Tankersley, while more involved with their Mixed Martial Arts arm has some organizational input over Label 56 as well. Label 56 has released a statement on its front page, which claims they’ve removed all of End Apathy’s material from their store and to “not take what Wade did as honorable or respectable and please do not think we are all like that.” Label 56 still promotes Youngland, however.

Label 56 is also promoting on their Facebook page the “European American Heritage Celebration” to be held in Moosic, PA this Saturday. That event is organized by Steve Smith, the former member of Keystone State “Skinheads” who last month became a Republican Committeman for his ward in Pittston, PA.